wind in the leaves with allies and friends

wind in the leaves collective – everything is everything: spirit of 5

In relationship with Lauryn Hill’s recent release of the same title, this performance takes as its focus the connection between worlds – spirit and physical – and the relationship between all things as a source of wonder and something to struggle for.

Our work here connects to ancestral voices that challenge contemporary Western values of knowing and we offer ways of seeing that are non-traditional and draw on our body memory to see each piece as a voice to each other and to all worlds.

In this performance the play is between the infinite and its endless extensions, how that great silence creates being, what is both constant and ephemeral, evaporating into the nothingness – its origins: creativity, wisdom of things and nothing, the mind, nature, procreation, stability…it carries that wisdom and power and the take is of mystery, mysticism…of what we know and can never know. the ambiance is wonder…

This performance/workshop combines the poetry of charles c smith with the choreography and dance of Aria Evans and Jesse Dell and brings these together with video dance and video art. 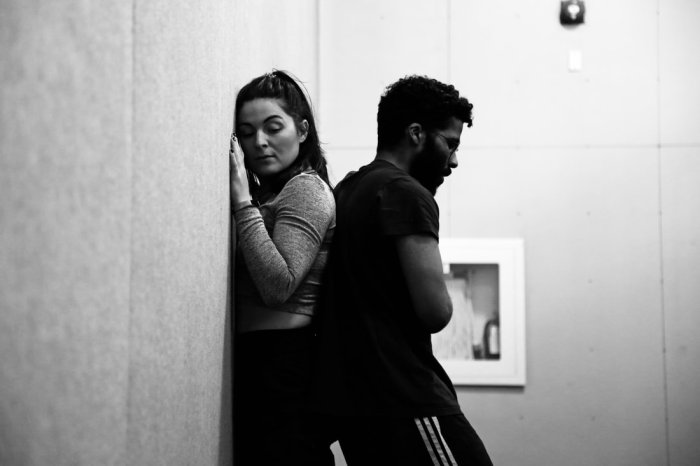 description: This duet from heart2heart is part of a larger work that weaves together a series of six unscripted duets centered around ‘conversations about the state of the world’. Watch the thought provoking, intimate and true stories of two artists from Toronto’s dance and theatre community unravel as they encounter one another. Portraying movement based dialogues with personal story-telling, heart2heart seeks to blur the line between public and personal. heart2heart offers a compassionate and fascinating dance theatre work that questions how we seek to build relationships with folks across difference.

Corynne Bisson is a dancer, choreographer, and filmmaker based in Toronto. As the co-founder of GALPAL Productions she has produced, directed and choreographed short dance films, including; Blade&Silk (2017), Let Her Out (2018), and Us (2019) with another currently in post-production. While continuing to produce her own dance film and live dance work Corynne continues to train locally and internationally. As one-half of GALPAL Productions she produces and co-hosts a weekly podcast, ‘Being an Artist is F**king Killing Me’. The podcast was created to address a hole and a need within the Toronto arts community. The podcast gives space for artists and creators to talk about the issues that matter to them, mental health and lack of recourse to name a few, freely The podcast gives space for artists and creatives to connect with their communities and to hone in on the tough conversations. Corynne continues to actively seek out opportunities to make connections in the Toronto arts community and collaborate in as many settings as possible.

Jordan Laffrenier is an Honours York University Theatre graduate and a current University of Toronto Marketing certificate candidate. He has held many musical theatre development roles in New York City, Los Angeles and Toronto, including Amélie on Broadway, Paradise Square/ Hard Times (Berkeley Repertory Theatre California), and Sousatska (Tiberius Entertainment). He is one of the founding members and Artistic Director of Then They Fight Theatre, a dramaturgically based theatre company dedicated to developing new work from the initial spark of an idea into a fully realized production. Through Then They Fight, Jordan has produced work that has continued its development with Cahoots, Factory and Soulpepper. He is an advocate of theatre that supports the community on and off stage and has partnered theatre productions directly with local charities such as The Mental Health Coalition in Hamilton. Currently, he teaches a unique drama program he developed with Vibe Arts that he based on his previous work teaching musical theatre at Innovative Arts. Outside of theatre, Jordan has had the tremendous opportunity to assist former NHL player Jim Thomson with content marketing, and Jordan previously held the coordinator position at the Producer Learning Network.).

This work is an inquiry into the body, emotions and mind through movement, music and stories.

The structured improvisation, Haqq is intended to provide a Ritualistic Platform for the dancer to search within and without while staying open to the witnessing souls.

The soul is the sun.
The Body the orbiting moon,
reflecting light in a dance of appearing and disappearing,
eclipsing and growing
through time and space.

Sashar Zarif is an internationally renowned multi-disciplinary performing artist, educator, and researcher whose artistic practice invites a convergence of creative and cultural perspectives. His interests are identity, globalization, and cross-cultural collaborations. His practice is steeped in the artistry and history of traditional, ritualistic, and contemporary dance and music of the Near Eastern and Central Asian regions. Focusing on Sufi and Shamanic dance and music rituals of these regions, he has developed a dance form he calls Dance of Mugham, a mature expression of his artistic investigation and practice. Sashar’s creative approach is called Moving Memories; a signifier for the in-depth study of memory that is a foundation of his practice. He has toured in over 40 countries across the Americas, Europe, North Africa, Middle East, and across Asia, promoting cultural dialogue through intensive fieldworks, residencies, performances, and creative collaborations. In 2011, he received the honorary titles of Master of Dance from Uzbekistan State Institute of Choreography in Tashkent as well as Honorary Faculty Member at this institute for his work and contribution to dance in Uzbekistan. In 2012, Sashar Zarif was awarded a Queen Elizabeth II Diamond Jubilee Medal. Zarif Latest publication was a chapter called “Carrying My Grandmother’s Drum: Dancing the Home Within” in a book edited by Judith Rudakoff which was published by the Intellect Books Ltd. This Chapter was nominated for Canadian Theatre Research Award in 2018.

Presented by Citadel + Compagnie and wind in the leaves collective, through Bright Nights

Copyright © 2018, wind in the leaves collective. All rights reserved.

Project sponsors past and present: